It’s Friday, so that means it’s time for This Week in Social Analytics and our favorite posts of the past week in the world of measurement, analytics, and social media. See a great piece we missed? Link to it in the comments, or tell us about it on Twitter or Facebook.

Looking to go in a new direction with your next campaign? Use these examples to inspire.

The Highest Converting Images to Use on Social Media Networks [from Social Media Today; written by Jesse Aaron]

The right image can make all the difference in catching your audience’s attention.

Why It Might Be Time to Completely Change Your Social Media Strategy [from Convince & Convert; written by Jay Baer]

“In the shotgun approach, you don’t worry as much about building a big audience in any particular network, but instead building a touchpoint corral around each of your customers and fans. The holy grail isn’t one million Facebook fans, but being connected to each of your fans in as many places as possible. The more places you are connected to your customers and fans, the more places you have permission to contact them, the greater the chances that you will actually be able to contact them somehow, somewhere.“

While this happened a while ago, it’s a good reminder that brands need to know the rules before launching a campaign on a new platform. No one wants to be the one that gets made an example of by the FTC.

What’s in a Detailed Buyer Persona Anyway? [from Business2Community; written by Erin Cushing]

“In the B2B realm, there are a few common areas that are always useful, and some information that is only useful in specific circumstances. Here’s the down-low on what you should consider when building your buyer persona.” 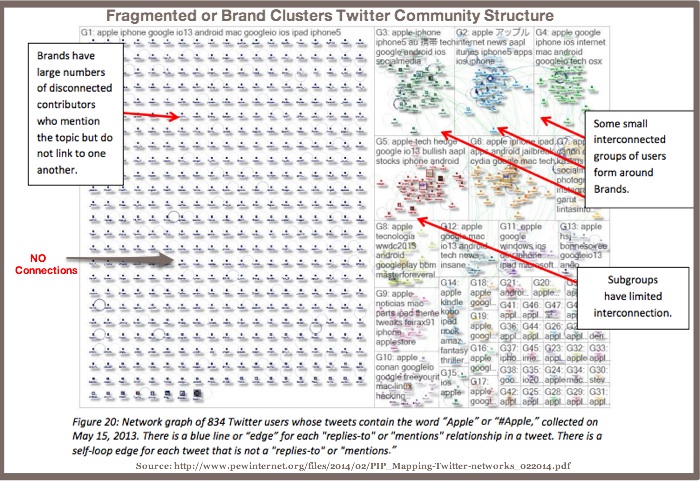 These communities tend to have large or very large followings but little connection between all of the accounts that make up the following. Also:

“It’s interesting to note that…Brand Cluster Twitter Communities do very little of their own tweeting.”

“Snapchat, Tumblr and Pinterest ‘have the potential to change the way the industry thinks about real-time marketing,’ said Kevin Lange, Starcom MediaVest Group’s svp of social.”

“One of the most well-developed marketing plans in the industry, the marketing campaign for True Blood is a four-part ongoing project. The online campaign features strategic blogger outreach and behind-the-scenes footage and interviews. HBO most excels in maintaining the True Blood image throughout multiple platforms: the show recently created a blog for one of the ‘newly-turned’ vampires.”