One minute after midnight (PDT!) on Sunday, May 26th, Arrested Development (AD) fans will be gathered around their glowing computer screens as the entire fourth season premieres on Netflix. Excited fans have been discussing the countdown to their streaming binges on Twitter and Tumblr, and as Gene Parmesan is unavailable to disclose their discussions with you, you’ll just have to stick with us instead. (Although it’s entirely possible we’re just him in costume.)

As of yesterday- four days away from the season four premiere- 486.6k Tumblr users generated 19.1k posts with over 1 million notes, since we started tracking on April 22nd. Posts about Arrested Development on Tumblr spiked on May 13th (that day accounts for about 8% of total posts so far; we’ll get to why in a minute), and note activity on posts spiked before that, on April 24th: the day that character posters were released.

On May 13th, the big spike in posts came from the release of the first trailer for season four, which can be found in the second of ten most popular AD posts. From April up to this week, the most popular posts from the Tumblr discussion came mostly from fan-run Arrested Development focused blogs; half of the top ten posts came from the aptly named The Bluth Company, including the most popular post overall. (Usually seen as a GIF, that moment from the show is just as fun when drawn out into a high-quality photo series.) 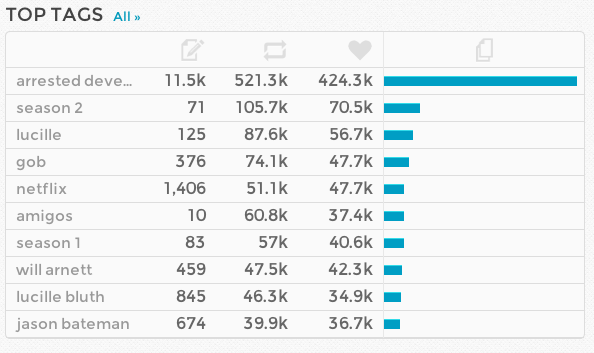 Lucille naturally gets two tags of her own, even if Tumblr is something she would probably be suspicious of.

Out of the total 105.4k tweets made mentioning Arrested Development on Twitter, activity spiked on different days than on Tumblr, with the most contributors (13.9k) sharing the most tweets (16.1k) on May 20th:

Overall since May 14th there have been 65.1k tweets from 75.7k contributors; that averages out to a little over 11.7k tweets a day, with nearly 1.5 tweets per contributor (we imagine those half-tweets wear cutoff shorts all the time, even in the shower).

Really the most burning question all of this has left us with is this: is it May 26th yet? We should probably all use the remaining days to stock up on juice boxes, Cornballers and frozen bananas since we’ll be sleeping through all the Memorial Day cookouts with our families to spend hours with the Bluth clan instead.