Awards season is upon us, and this year it kicked off with Tina Fey and Amy Poehler taking over hosting duties at the 70th Golden Globe Awards. We love the Golden Globes; this is the third year we’ve monitored tweets about the event (see our 2012 and 2011 coverage). This year, we’ve been tracking all the social media buzz before, during and after the awards show that aired on Sunday, January 13, 2013, again in conjunction with mhCarter Consulting and the Hollywood Foreign Press Association. And we didn’t just stick to Twitter either; for the first time, we also took a look at the night’s Tumblr data!

First, let’s talk Twitter… How did the Golden Globes do on Twitter? Tweets spiked several times the night of the show, showing us when the audience at home was the most excited about events onscreen. The first spike was in the initial minute of the show, which saw 7,700 tweets. Things got chattier after that; when Adele won the award for Best Original Song (Skyfall for the Bond film of the same name) Twitter activity spiked to 13.4k tweets per minute (tpm). Adele was later beat out by the appearance of former President Bill Clinton taking the stage to introduce Lincoln;  tweets further spiked up to 18.5k tweets per minute, claiming the highest tpm spike of the evening.

@TheEllenShow’s tweet about the hosts saw was the most popular tweet of the night, accumulating the highest exposure and most RTs during the show, with nearly 22 million impressions and 7,991 RTs.

Overall, more than 108 million unique  Twitter accounts were reached by tweets about the Golden Globes - and that’s just on the day of the show. This is up over 14.4 million from 2012, and over three times the reach of Golden Globes Twitter chatter from 2011. Contributors more than doubled this year – from 296K people talking about the Globes in 2012 to 599K in 2013 – and the total number of tweets increased by more than 50% from 2012s (from 822K to 1.3 million).

Looking at all of the data since the nominees were announced on December 13th, 2012, total reach was over 160 million unique accounts, and more than 756K different Twitter users contributed more than 2.1 million tweets.

What were some of the specific things people were talking about on Twitter?

As part of the excitement approaching the 70th Annual Golden Globes, @GoldenGlobes asked fans to tweet their questions for the nominees with the hashtag #askGlobes; the questions would then be asked of the winners backstage.

One of the top contributors to the hashtag was a fan account for Meryl Streep (@MerylStreepSite), asking and retweeting other Meryl fans’ requests to ask the actress what she thought of her dedicated fans, or “Streepers”.

Unfortunately, Meryl didn’t win so the Streepers never got their question answered. Jennifer Lawrence took the trophy for Best Performance by an Actress in a Motion Picture, Comedy or Musical, for Silver Linings Playbook– and breathlessly joked about beating Meryl when she took the stage to accept.

The @GoldenGlobes confirmed backstage that “JLaw” has been her nickname for years.

The #askGlobes hashtag for the Golden Globes account was one of their top 5 hashtags for the night of the show; producing a total of 2,016 tweets with a peak activity time of 6pm PT, when the hashtag saw over 4.7 million impressions. The @GoldenGlobes retweeted the questions asked of the winners, with the answers, and kept promoting the hashtag:

What were people talking about on Tumblr?

Tumblr saw 47.6k posts about the Golden Globes the night of the show. Flouting convention, the majority of the posts were text posts rather than photos: 31K text posts and 18K photo posts. However, the photo posts saw much higher engagement rates. For the total 1.8 million notes, nearly 1.5 million of those notes were on photo posts (814.7K reblogs and 668.2K likes) compared to the smaller 231K notes for text posts.

The most popular post was a GIF of Anne Hathaway accepting her award for Best Performance by an Actress in a Supporting Role in a Motion Picture, for Les Miserables:

This post from Beaver Paralyzer earned 66.6K notes in just a few hours, which includes 153 direct reblogs, 36.9K amplified reblogs, and 29.5K likes. The reblog tree for this post was impressively extensive, showing the majority of reblogs occurred out past the 9th degree, suggesting a very diverse pool of curators: 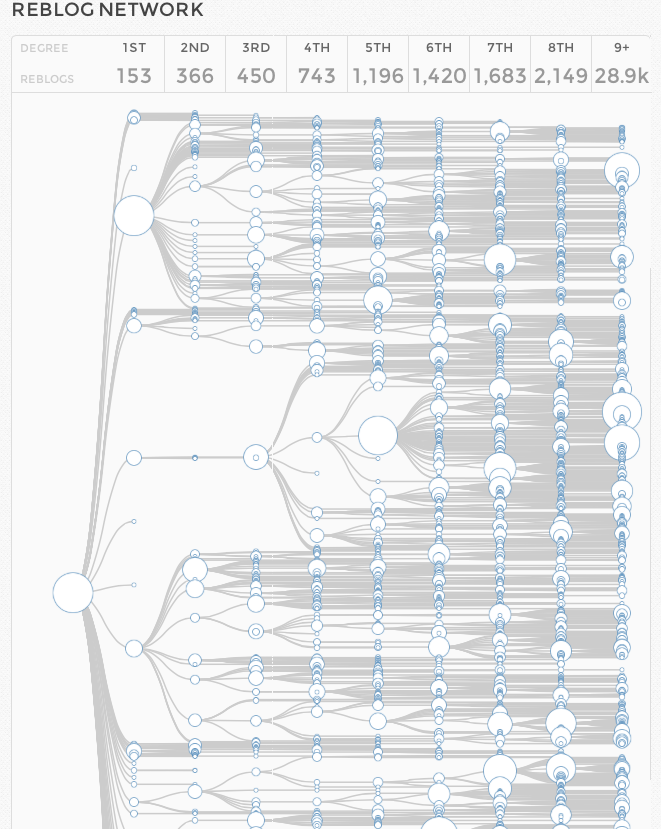 Indeed, the entire tree doesn’t easily fit on a screen; that’s a little more than half of it there.

The second and third most popular Tumblr posts were also GIFs, in this case two GIF-sets of the hosts making jokes between awards. They’ve already garnered 41.8k and 37.2k notes, respectively.

What does this tell us about watching TV and simultaneously using social platforms?

While many think of Twitter as the main social channel to talk television – Twitter has their own dedicated @TwitterTV account, after all – more and more people are flocking to Tumblr as well, for its expanded ability to “liveblog” a TV event beyond the relatively text-limited Twitter platform. The ever-popular GIF just doesn’t work as well on Twitter as it does on Tumblr.

Comparing the overall number of tweets made to number of Tumblr posts between December 13 and January 13, there were twice as many tweets about the Golden Globes: 2.1 million tweets vs. 1.0 million Tumblr posts and reblogs.

Looking at unique participants paints a similar picture: 756K users posted tweets on Twitter, and 20K posted on Tumblr, but that Twitter number includes RTs. If you count rebloggers on Tumblr, that’s another 303K (not to mention another 255K likers). The Twitter numbers don’t include favorites, which would be similar to Tumblr likes, but these numbers are still closing the Twitter/Tumblr output gap: 322K posters and rebloggers on Tumblr to Twitter’s 756K tweeters.

We can wager a guess that those Tumblr numbers will continue to catch up to Twitter numbers as Tumblr gains popularity as a place to discuss a live television event together. This is especially likely considering Tumblr’s reputation as a place for TV show and movie franchise fandoms to set up shop and blog (and reblog) about the characters and worlds they love. Why not start doing it live as well as between seasons of the BBC’s Sherlock?

In the future, we expect to see more fans switching back and forth between Tumblr and Twitter during an awards show or their favorite series, on their phones or laptops, using both sites to their respective strengths. Social TV watching has really only just begun.

That was neat! I want more!

We’re glad to hear it. If you liked this look at Twitter and Tumblr activity for the 2013 Golden Globes, stay tuned for our more in-depth case study on the event. We’re going to take a deeper look at the various social initiatives the HFPA put together around the show, including the #GlobesParty Instagram promotion the Globes ran to get fans involved at home, and more. Check back soon!