The latest Twitter account to enchant us all, seemingly overnight, is bringing delight to grammar enthusiasts everywhere: “Your In America Bot” (@YourInAmerica) swoops in on unsuspecting offenders of the English language, who are, entertainingly, mostly trying to shame others for not speaking English.

Created on November 23rd, @YourinAmerica counted just under 15k followers only five days later, with an output of fewer than 100 tweets.

How is that possible? Let’s look at the reach of the single tweet above.

Not bad. But let’s understand how almost 250,000 accounts were reached, when this account has only a fraction of that number of followers, even at the rate it has grown.

So actually 241 separate Twitter accounts contributed to the exposure of this one tweet, mostly by picking it up and retweeting it: 219 retweets, 12 replies, and 18 other tweets were made. On the day this tweet was published, the account had about 8,000 followers, meaning just about 3% of the follower base was able to lead to this much exposure on a single tweet.

And here’s where it really gets interesting: looking at who is doing the retweeting. @SarahSpain, ESPN1000 host, has a lot more followers than @YourinAmerica and her retweet of the original tweet is actually what generated the most exposure.

In this way, TweetReach helps you figure out who the major influencer is in the reach of this particular tweet, in way that would be much more difficult and time-consuming to figure out manually. 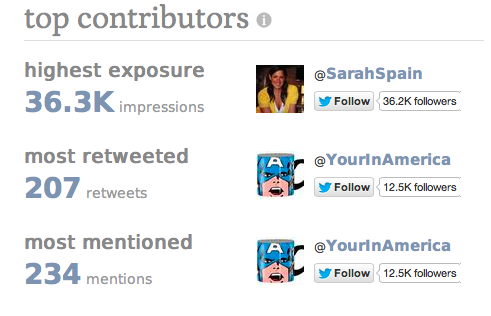 This gives you an idea of whom to cultivate relationships with on Twitter. If you see that one account with a lot of influence (be that a large audience or simply highly engaged followers) consistently interacts with you and/or retweets your content, you know they like what you have to say and are helping you grow your own audience.

For example, the second most retweeted tweet only had 7 retweets – compared to the original, unaltered tweet’s 207- but this is still important to note because it indicates that @alysonfooter has an engaged audience of her own. (Note that these numbers reflect the two messages that were retweeted the most– the original and one with the original message plus commentary. More retweets were also made with different commentary added to the original, which altogether add up to the total number of retweets made: 219.)

Perhaps the most interesting takeaway from @YourInAmerica, however, will be if anyone really does learn a grammar lesson. So far most of the victims seem to have deleted the offending tweet in question after falling victim to @YourInAmerica.