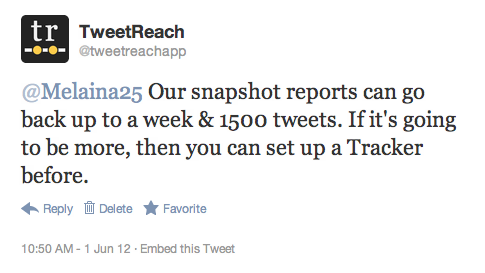 So, if there’s a contributor or tweet in your TweetReach snapshot report or Tracker that has only generated a few impressions, even though you know the account has hundreds or thousands of followers, then the tweet is most likely an @reply. The purpose of a reply is to continue a conversation between two Twitter accounts, and as such, replies are only delivered to users who follow both the Twitter accounts involved in the conversation. Twitter does this to keep your stream from getting overly cluttered with irrelevant conversations you’re not involved in. So even if an account has thousands of followers, an @reply will only appear to users who follow both the sender and recipients, and will generate as many impressions as there are common followers.

There’s more on how Twitter handles replies on their blog. Basically, using your Twitter client’s reply button or arrow will limit the people who receive your tweet to only users who follow both accounts in the discussion, even if you add a space, period or other punctuation in front of the username. If you want a tweet to be delivered to all your followers, do not use the reply button and do not start the tweet with a username.