The 54th Annual Grammy Awards were held in Los Angeles last weekend on Sunday, February 12, 2012. More than 39 million viewers tuned in to watch their favorite bands, musicians and artists come together for a few hours during what many refer to as “music’s biggest night.”

During the broadcast on Sunday, the official #GRAMMYs hashtag was tweeted 2.1 million times by more than 700K people, generating a unique reach of nearly 60 million. At its peak, use of the #GRAMMYs hashtag spiked up to 18,000 tweets per minute.

Check out this stream graph of tweets about the most popular artists (click through for the interactive version). Each colored layer represents tweets about one artist. The spikes on the graph illustrate tweet volume throughout the show. 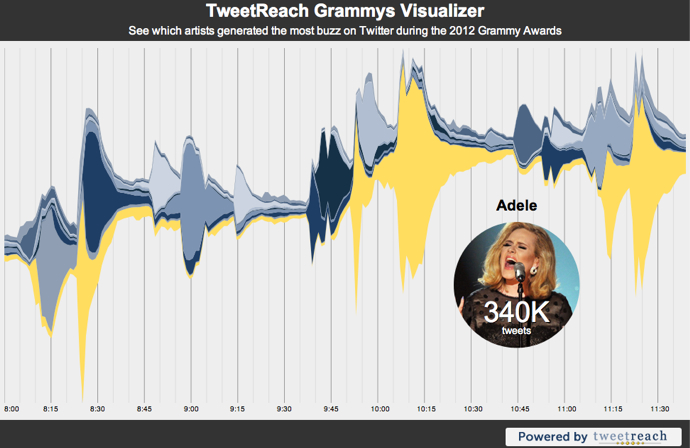 The most-talked about artists during the 2012 Grammy Awards were:

Whitney Houston passed away suddenly on Saturday, which had a big impact on this year’s Grammys. The show’s touching tribute to the singer generated a lot of buzz on Twitter as fans and friends remembered Whitney and her music; there were more than 66,000 tweets about Whitney during the show.

Chris Brown ignited a great deal of controversy at this year’s awards, appearing at the Grammys for the first time since he was arrested for abusing his then-girlfriend Rihanna in 2009. The more than 150K tweets about his two Grammy performances last night ranged from disbelief and anger at his inclusion to support from his fans.

Nicki Minaj generated an entirely different kind of controversy with her red carpet entrance and subsequent performance of her new song, “Roman Holiday.” Viewer opinions varied, with some finding it interesting, bold or weird, while others (like the Catholic Church) found it offensive.

What did you think of the 2012 Grammy Awards? What was your favorite performance?

Interested in stream graphs? Give this paper by Byron and Wattenberg a read.