We’ve upgraded our TweetReach Trackers to include a new way to find out even more about who is tweeting about your campaign, your client or your company. Ever wanted to know who’s creating the most popular content and driving the most engagement in the conversations about your campaign? Our new Tracker contributor reporting can help you identify those key contributors – the influencers, the people driving the most retweets, the highest exposure and the widest amplification, your biggest fans and advocates.

In addition to traditional metrics like number of tweets and impressions generated by each contributor, we’ve added a bunch of new metrics about each contributor. Our new contributor metrics include:

You can also drill into any contributor to see detailed metrics for that person. Just click on any username to see that contributor’s details. 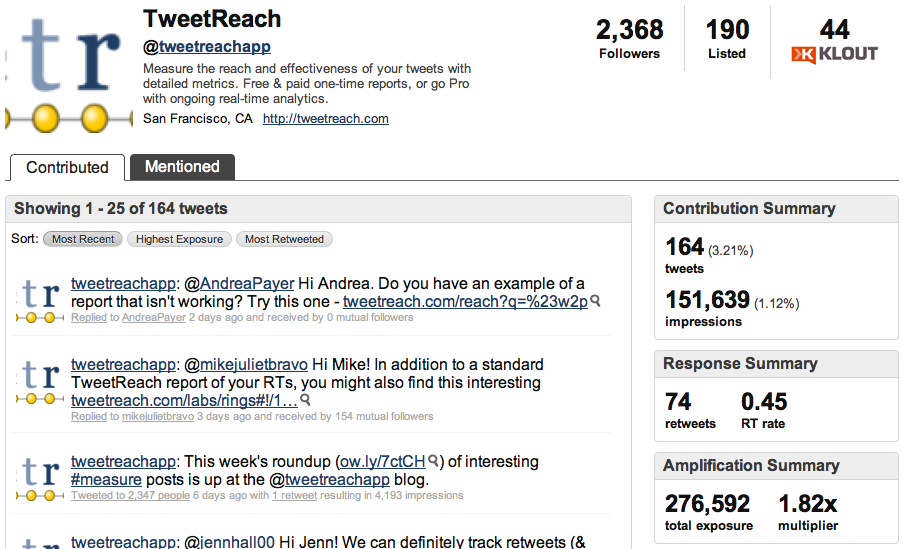 A word to the analytics geeks

The word amplification has been used in a lot of contexts by many very smart people as an important social media metric, most recently by Avinash Kaushik in his post about the best social media metrics. We should note here that what we refer to as retweet rate is roughly the same as what Avinash calls amplification. We obviously believe this is a very important measure or we wouldn’t have included it. However, we think it doesn’t accurately describe the extent to which a contributor’s message is amplified. To do that, one needs to consider the overall increase in audience as a result of the retweets. This is how our amplification multiplier metric works. We look at growth between the impressions generated by the original tweet and the total impressions generated by the original tweet and any RTs or replies to that tweet. We express this as a “multiplier” so that it neatly describes how many times larger the total exposure was vs the original exposure.