As always, this year’s Super Bowl ads generated lots of conversation. We posted an analysis of overall Super Bowl ad winners based on tweets, but we wanted to have a more in-depth discussion here about some of the individual ads.

One of the most-buzzed about Super Bowl ads was the Groupon Tibet ad. Many people are discussing this ad, debating whether it was offensive or hilarious. No matter what you think of it, the Groupon Super Bowl ad got people talking.

But for us, the big Super Bowl ad surprise was the Chrysler Imported from Detroit commercial. Not only was this one of our personal favorites of the night, but it seemed to be Twitter’s favorite, too. We tracked more than 38,000 tweets about this ad during the game, making it the most-tweeted about ad of Super Bowl XLV, even beating out those Doritos and Bud Light commercials. In the minute immediately following the ad, conversation about Chrysler peaked at 2,816 tweets in a single minute.

As soon as the game was over, I asked around about what people thought about the ads. Overwhelmingly, people loved the Chrysler ad. Here are a few of their thoughts:

As a former Detroiter and someone who has much love for the city (hopes to end up there one day again), and has made no secret about her love for Eminem, that Eminem/Chrysler ad just made the “Superbowl commercials” for me. I felt it – it made the hair on my arms stand up – you know he loves the city. It just reminded me of the spirit and heart in that city! -Maegan S.

I have to say overall American Car companies stepped up their advertising. Fewer Midwestern guys in trucks and more “stuff I’d like to buy”. -DJ S.

The Detroit commercial was amazing – such a wonderful depiction of the city. -Kelly R.

We also generated a word cloud from tweets about the ad. We removed the words related directly to the commercial (Chrysler, Detroit, Eminem, Super Bowl, and so on) to surface people’s opinions of the ad. As you can see, the overall opinion of this ad was very positive. 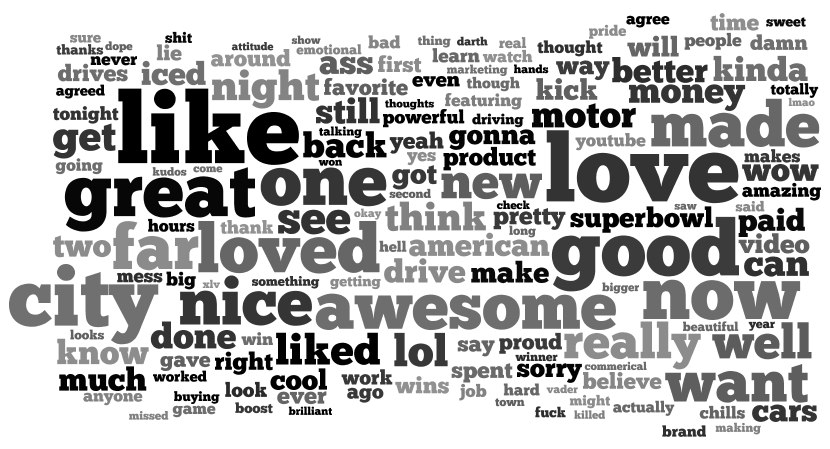 The Chrysler word cloud speaks even more loudly when compared to the Groupon commercial’s word cloud. Take a look: 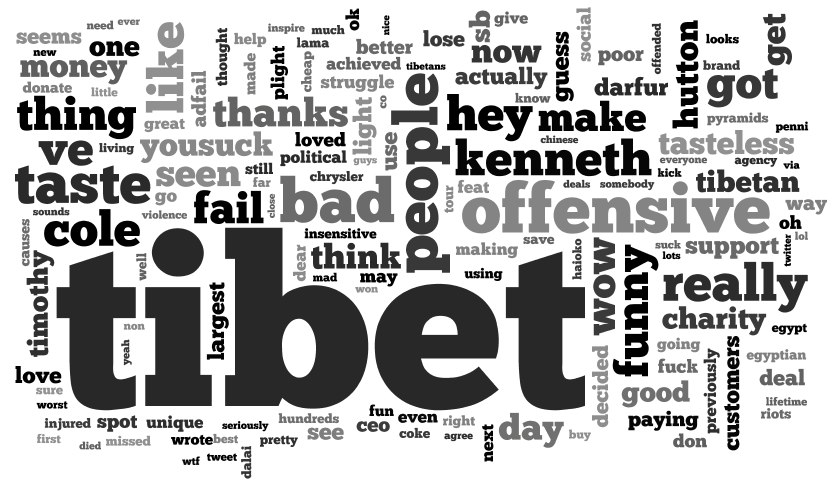 Tweets about Chrysler often included words such as like, great, love, good, awesome, nice, and want, while tweets about Groupon often included words such as offensive, bad, fail, taste, and kenneth (in reference to a recent controversial tweet from fashion designer Kenneth Cole). And maybe this is a case of any publicity is good publicity for Groupon, as the ad has certainly caused quite a stir. The Groupon ad is steeped in humor and irony; CEO Andrew Mason claims the commercial was intended to make fun of themselves at Groupon. But Chrysler’s ad was far less ironic; it seemed to take itself and the audience seriously. Maybe this is why people responded so positively. The Detroit ad certainly stood out from the other commercials shown before and after it, both in terms of the commercial itself and the tweets about it.

Stay tuned, as we’ve got lots more analysis of the Super Bowl tweet data coming up later this week.