For months – even years – people have been speculating about when the iPhone would be available on Verizon. Today, we finally learned that the Verizon iPhone will officially go on sale in February.

Here’s the tweet volume for January 11 (times displayed in PST):

Over the past few weeks, speculation about the Verizon iPhone really heated up. Many people thought the announcement would come at this year’s CES event. Others joked that Apple, who didn’t attend CES, was intentionally waiting to announce the partnership, in order to overshadow CES. And then last Friday, January 7, we learned of a Verizon press event scheduled for Tuesday, January 11, just two days after CES ended. The Wall Street Journal confirmed that the Verizon Apple partnership would be announced at this event. People got very excited. On that day alone, our TweetReach Tracker monitored more than 45,000 tweets about the Verizon iPhone, with a reach of 19.3 million unique Twitter accounts.

Given how many anticipatory tweets we tracked, we were very excited to see the tweets on the actual day of the official announcement from Verizon. The announcement was scheduled for 11 a.m. ET/8:00 a.m. PT on January 11, 2011. During the announcement hour, tweets about the Verizon iPhone spiked, as people posted updates from the announcement and their opinions on the news. In just that one hour, we tracked 56,303 tweets from 39,275 different users, reaching 21,576,495 unique Twitter accounts. 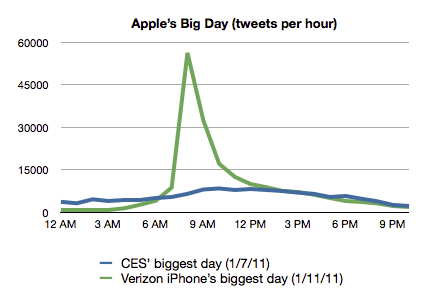 What this tells us is that Apple can basically do in one day what 2,700 other tech companies did in an entire week at CES. No wonder Apple is the world’s second most valuable company.