This week’s TechCrunch Disrupt conference has been quite a show. In fact, since the conference started Monday in San Francisco, TechCrunch Disrupt has seen total audience exposure of nearly 50 million impressions on Twitter (more about how we calculate impressions here). It certainly helps when there’s rumor followed by significant acquisition news (signed on stage, no less) with a dose of Hammer Time thrown in. Tweets from MCHammer himself, Om Malik, Robert Scoble, and Steve Case don’t hurt either. 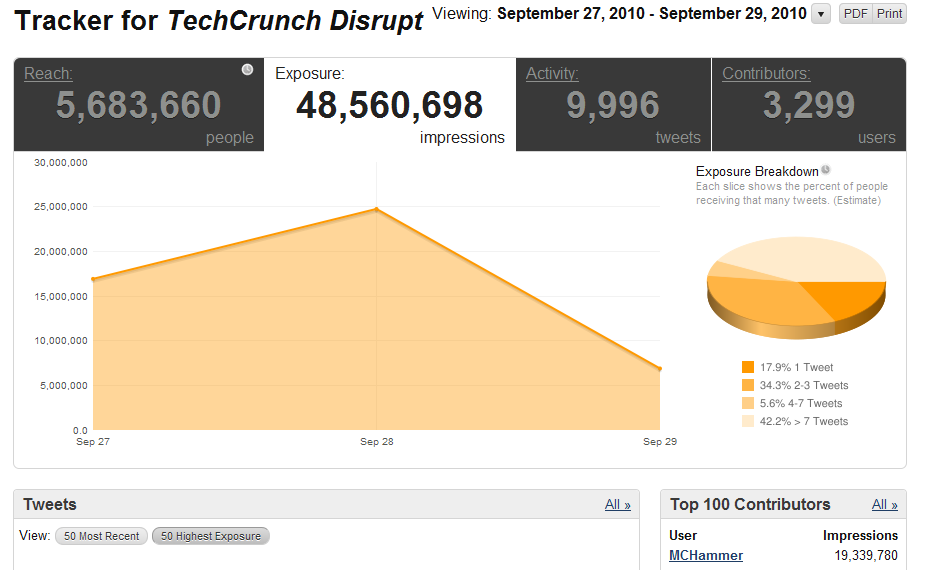 Upon closer review, the numbers reveal people were incredibly engaged and conversive around TechCrunch Disrupt, and absolutely told their followers – tweeting, retweeting and @replying over and over again. The 50 million in total exposure came from 3,300 Twitter users who tweeted over 10,000 times about the conference. In fact, 42% of the audience saw TechCrunch Disrupt-related messages SEVEN times or more. Talk about Hammer Time.  Just 18% saw a message once. Ultimately, since Monday, TechCrunch Disrupt has reached 5.7 million UNIQUE Twitter users.

By comparison, mid-September’s DEMO Conference saw total audience exposure of over 7 million with 1.1 million unique Twitter users were reached – all this from 3,700 tweets by 800 contributors. Yet TweetReach Tracker data shows the core DEMO audience was far less engaged or conversational: 58% of the audience saw a DemoCon tweet just once, while 20% saw a DEMO-related message more than seven times.

So what does this mean? While the TechCrunch Disrupt and DEMO ratios are roughly the same – and frankly, what you’d expect for these types of conferences – there seemed to be significantly more engagement by the TechCrunch Disrupt crowd. The same people saw tweets, retweets and @replies over and over again. But at some point, does this become annoying? If it’s a typical brand message, it probably does. If it’s a conference with breaking news and new technology being announced, perhaps not so much.

What do you think? Annoying or informative?