More than half of the traffic to TweetReach is from outside the US and slightly less than half of our traffic is from non-English speaking countries. We’re really excited that so many of you are coming to TweetReach from all around the world and we want to provide the best experience possible for you. 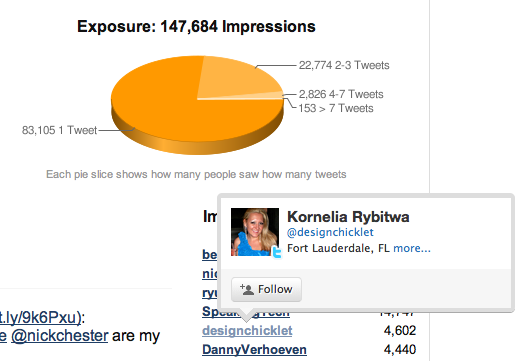 Good analytics tools not only help you learn, they help you take action. One of the things TweetReach enables you to do is discover your advocates; the people you should be engaging with because they’re spreading your message.

We’ve integrated a new technology called hovercards created by Twitter as part of their @anywhere program. Now, whenever you see a Twitter screen name in a TweetReach report, just hover your mouse over it and you can follow that user with one click without even having to leave TweetReach. Just like that, you can connect with your advocates and start building long term relationships.